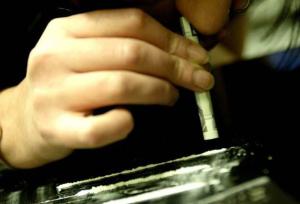 Student cocaine abuse, why do they use it?  Cocaine gives a person a feeling of euphoria, energy, and at times, an unbelievable and almost superhuman sense of control and mastery.  For instance, some people who have taken cocaine have been known to leap out of windows or off rooftops, thinking that they could fly or that they could jump dozens of feet without getting injured.  There is, however, a physiological reason why students continue to use cocaine after their first encounter.  Cocaine exhausts the "feel-good" neurotransmitter dopamine, thus causing a need for even more cocaine to achieve euphoric feelings.  In short, and from a physiological perspective, cocaine use perpetuates more cocaine use.

Student cocaine abuse creates a tolerance in the user so that as time goes by they feel the need to increase the amount of drug they intake. Additionally, many cocaine abusers report that they fail to achieve as much pleasure as they did from their first cocaine exposure. Because cocaine is such a highly addictive drug, it is not uncommon for student cocaine abuse to escalate into full blown addiction in a very short period of time.

Why is student cocaine abuse increasing?  One of the reasons is that celebrities who are addicted to cocaine have become "walking cocaine advertisements" and, as a result, have been able to adversely influence others, such as students, who may have access to relatively large amounts of disposable income.

Student cocaine abuse is a serious problem for many of todays youth. Teens and young adults will often experiment with cocaine once and find that the "high" they experience is like nothing they have ever felt before. Soon, they are using the drug because they are bored, stressed, partying, etc. How can you tell if student cocaine abuse is a problem for someone you care about?

What are the short term effects of student cocaine abuse?

These short term effects can also affect performance at school, work, and in extracurricular activities. They may lead to longer term problems that can result in difficulty getting and maintaining a job, getting into college, and interacting normally with others.

Long term health effects of student cocaine abuse can be even more disturbing. If one uses cocaine for a long period of time, or in high dosage amounts, he or she may experience the following health effects: